Najib was charged with one count of abuse of power, three counts of criminal breach of trust (CBT), and three counts of money laundering, all involving RM42mil misappropriated from SRC International Sdn Bhd, a 1MDB subsidiary.

2.25 pm: Shafee gives examples of precedents where in those cases, sentencing had been postponed to different dates. “This has been done almost all the time at the lower courts,” Shafee says. The senior lawyer added that the practice of adjourning sentencing was for the purpose of mitigation.

2.20 pm: Najib is back in the dock and Justice Nazlan takes the bench. Shafee begins addressing the court.

2.18pm: Najib is back in the courtroom. With hands in his pocket and wearing a face mask, he is talking to an unidentified man in his entourage. 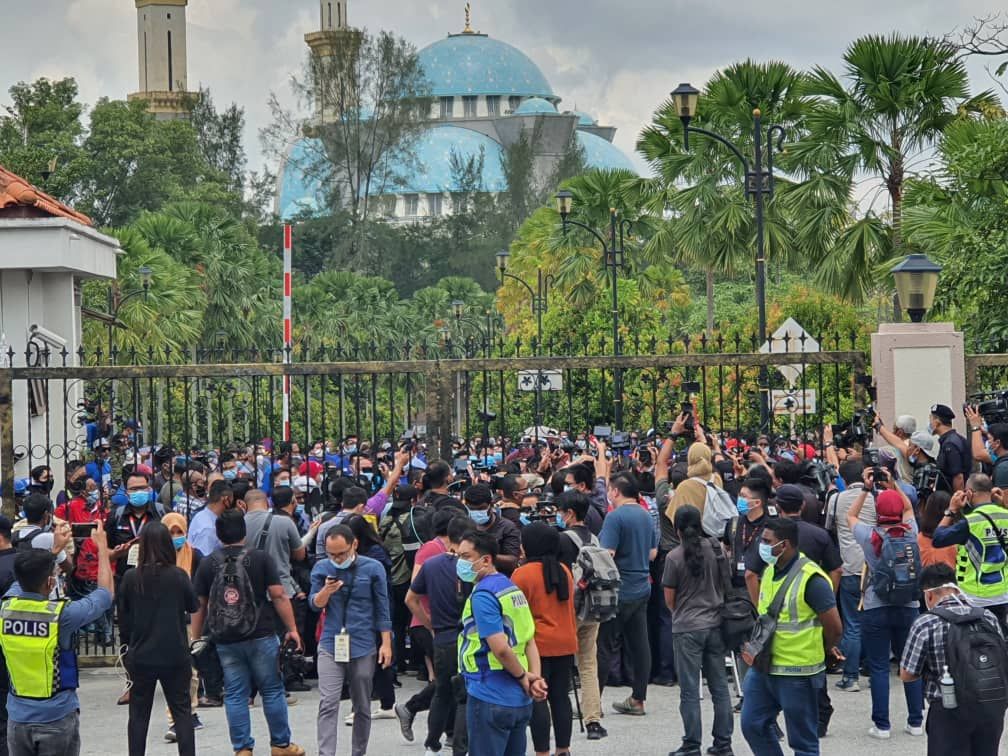 12.57pm: Najib’s supporters seem to be in a solemn mood after they discover the verdict and await the decision on sentencing.

12.52pm: The court is adjourned. Najib’s supporters seen crowding him in court.

12.50pm: Najib taken into custody in the witness room attached to the court room. The former prime minister will remain there until the proceedings resume at 2pm and he is not allowed to leave since he is convicted. Food for lunch will be provided for him and he is allowed to pray in the room. 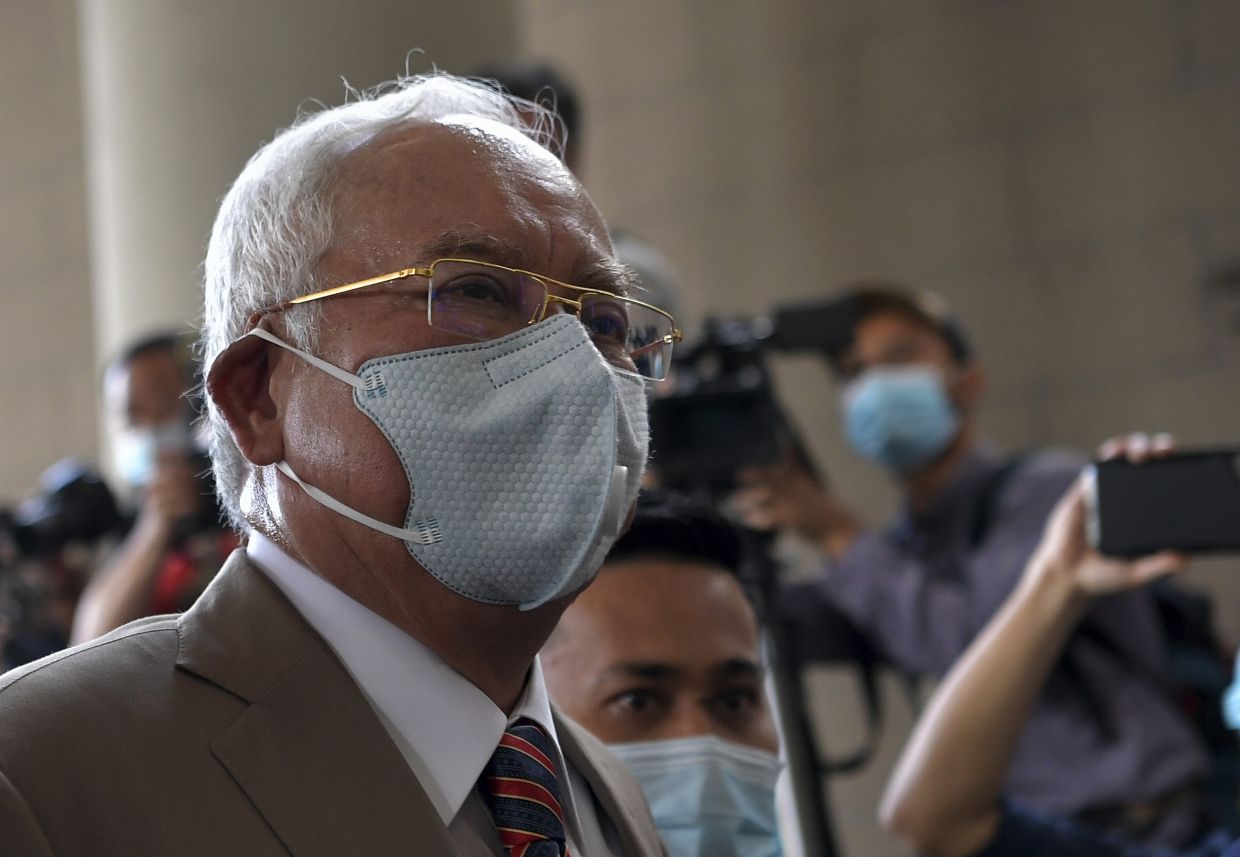 12.50pm: Justice Nazlan agrees to postpone matter until 2pm to decide. “If the court is unconvinced, the court will proceed with sentencing.”

12.45pm: Shafee said there were precedents but the cases were not reported. Justice Nazlan then asked what happened to the accused in such a case. Shafee: The case was just adjourned. It is bound by the terms of the bail until the matter is over. Shafee says Najib’s bail in SRC International was a RM1mil but the global sum his client is paying for bail for all his cases is RM6mil which he says is a “punishing amount”. “His account as been frozen. He’s been slammed with RM1.69bil claims in tax arrears,” Shafee said. Justice Nazlan appears unconvinced as of now. “I am unconvinced,” the judge said.

12.41pm: Justice Nazlan asks Shafee, “Do you have any precedents where the court does not proceed with sentencing?”

12.37pm: Shafee, in justifying his request to postpone sentencing, said the sentencing must be done on the offences rather than the personality. “I find it more interesting in this case, more challenging in this case (referring to mitigation for sentence). “It is not an understatement to say this is the biggest case in the world. I say that without batting an eye. “We need some time to do proper mitigation,” Shafee added. He said he takes mitigation very seriously and doesn’t take any less than two hours to mitigate for his client.

12.32pm: Ad hoc prosecutor Dautk V Sithambaram objects to postponing Najib’s sentencing till Monday. “Your Lordship has found the accused guilty. Usually, a stay comes after a sentence. Stay of conviction? There cannot be a stay of conviction.”

12.25pm: Najib appeared calm when Justice Nazlan read out his decision and his lead counsel, Shafee Abdullah, says sentencing and mitigation should be adjourned to Monday (Aug 3). “As we are aware, the whole country is in lockdown. My client is not going anywhere.”

12.17pm: The defence has failed to establish beyond reasonable doubt the charges of CBT against the accused, says Justice Nazlan As the shadow director, he was entrusted with the property and with dishonest intention had misappropriated and used for himself the RM42mil. The judge said the defence had also failed to cast reasonable doubt for Najib’s three counts of money-laundering (Section 4(1)(b) of the Anti-Money Laundering, Anti-Terrorism Financing and Proceeds of Unlawful Activities Act). “I therefore find the accused guilty and convict the accused on all seven charges.”

12.01pm: On the issue of letters received by Najib, which claimed that he had received a donation from King Abdullah, Justice Nazlan said the writer – Prince Saud Abdulaziz – did not mention in the letters that he was writing on behalf of the King.

(The court had heard that the MACC made a trip to Riyadh in November, 2015, to obtain a statement from Prince Saud regarding four letters that were said to be signed by him, claiming that a RM2.6bil donation was made to former prime minister Datuk Seri Najib Razak.)

Justice Nazlan says the letter mentioned a large sum of money yet the accused did not make any enquiries about the money to satisfy himself.

“The writer said he did not expect anything in return, which is of suspicious nature, yet the accused, an intelligent person and a prime minister, did not probe further,” he said.

11.45am Justice Nazlan spoke about the defence’s contention that the accused believed the money in his account came from an Arab donation.

“In my view, even at this juncture, when the accused was told of the impending donation from Jho Low, the accused should have taken steps to verify and adduce proof of the information.

“There were no details about the donations or whether it would come with conditions. “Is it foreign aid, a grant or a loan? The accused could have picked up his mobile and communicated especially with his foreign affairs minister or the Saudi ambassador. Instead the accused, as PM, accepted a simple confirmation from Jho Low,” he said.

11.36am: Najib, who is sitting in the dock with an inflatable cushion for his back, appears calm as Justice Nazlan continues reading out his judgment. 11.30am: On the defence’s claim that Najib’s signature was forged in some documents. judge says, “The question is, who has the audacity to forge his signature?”

11.19am: Justice Nazlan says testimony in court confirms the involvement of Jho Low, including giving instructions regarding Najib’s bank accounts to Joanna Yu, whom defense has claimed is a “rogue banker”. 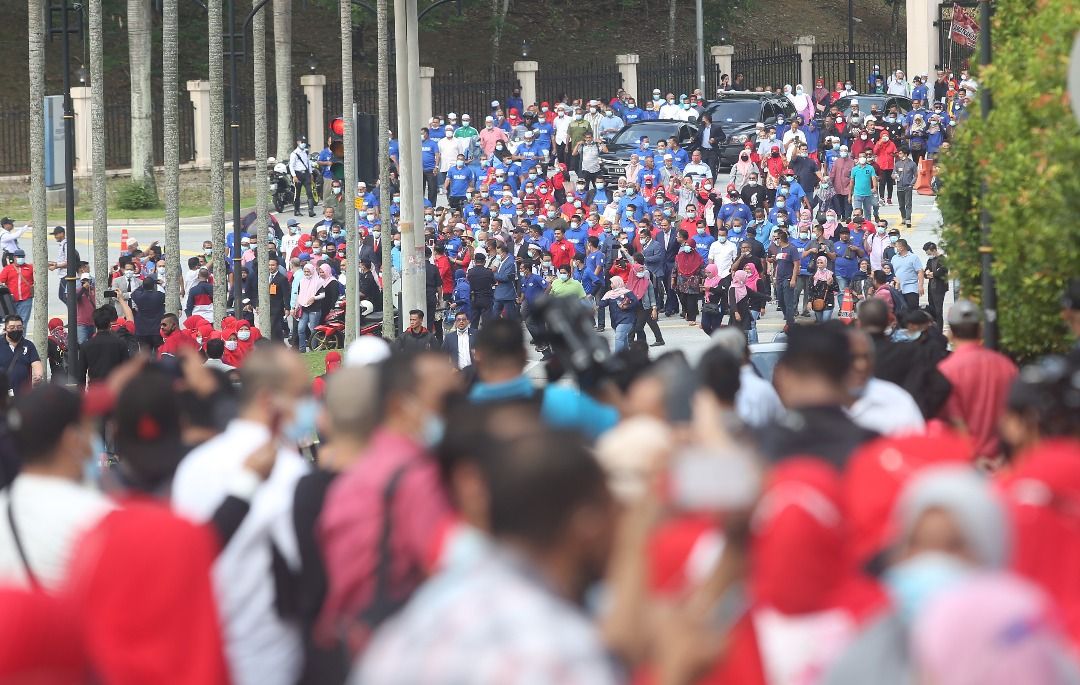 11.16am: Police have warned supporters and others in and around court complex to maintain social distancing and follow SOPs of recovery movement control order.

11.01am: Justice Nazlan has completed a segment in his judgment on the first charge relating to power abuse. “In conclusion, in my judgment, having considered all the evidence presented in this court, I find that the defence has not succeeded in rebutting the presumption on the balance of probabilities or raising reasonable doubt against the accused under Section 23(1) of the MACC Act.” 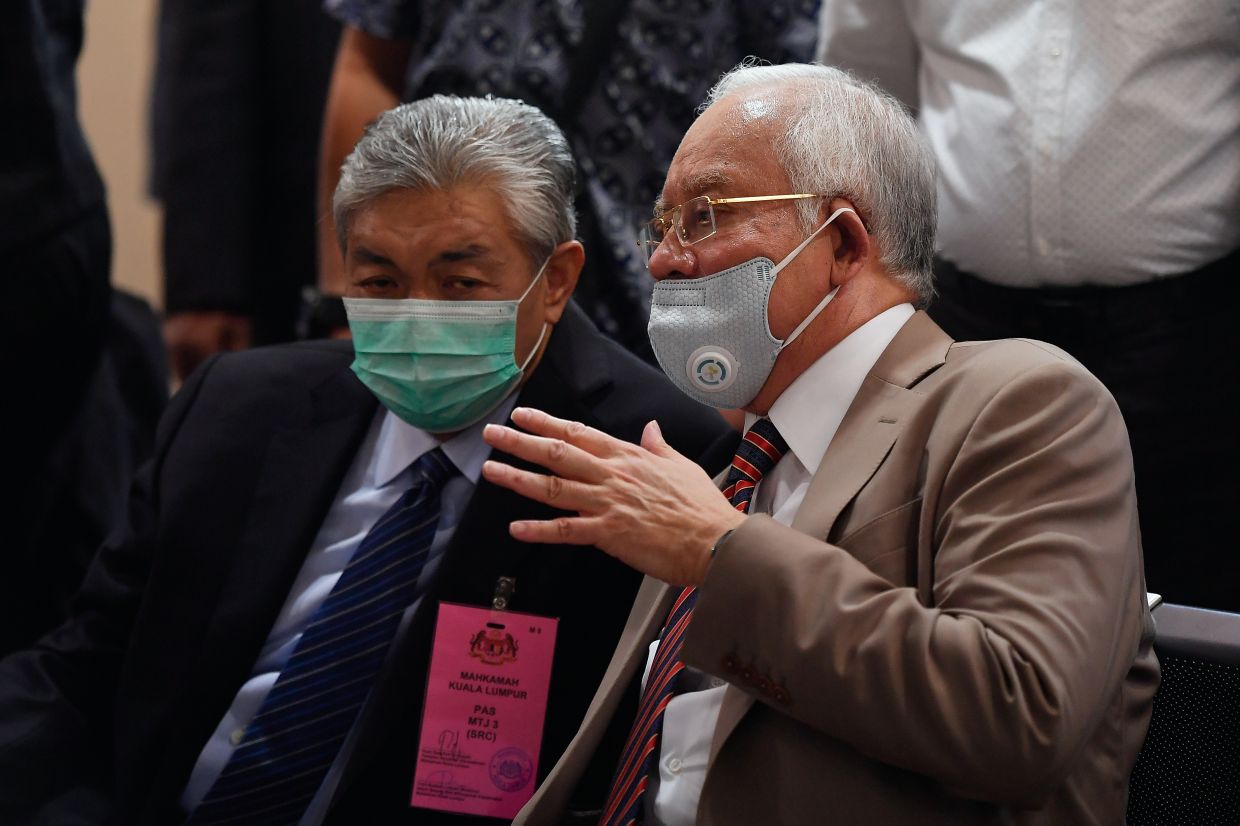 10.34am: Justice Nazlan is going into issue of loan approvals for SRC International. 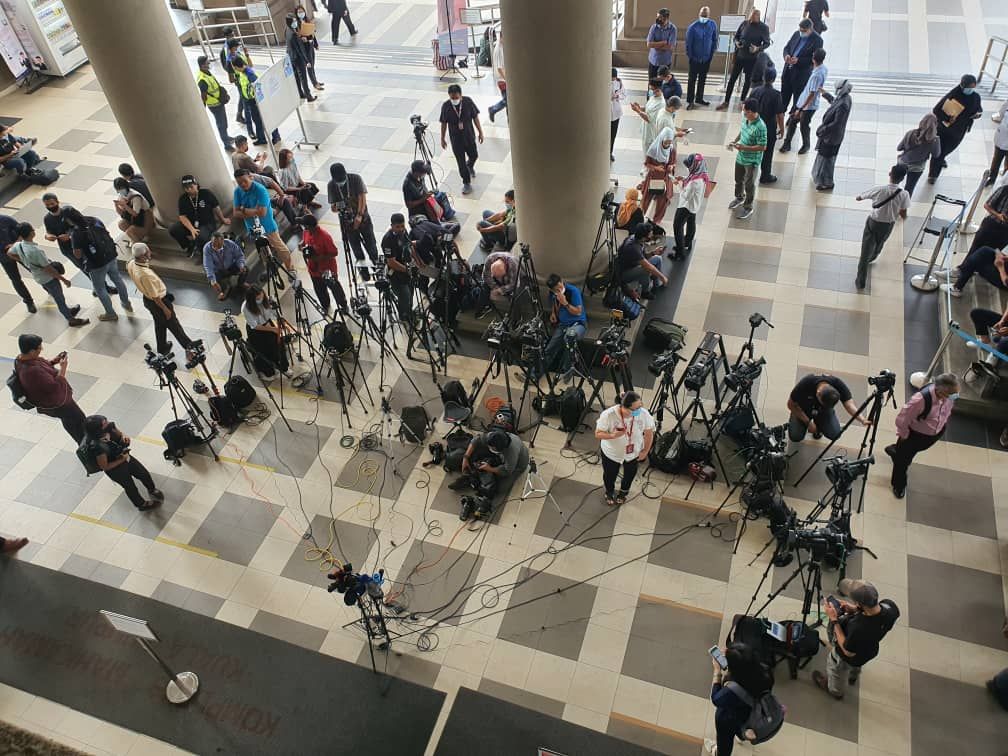 10.30am: Media personnel have gathered in the lobby of the court complex.

10.27am: Justice Nazlan is reading his judgment, touching on the establishment of SRC International.

10.17am: Justice Mohd Nazlan Mohd Ghazali enters the court room. Ad hoc prosecutor Sithambaram stands up to introduce the prosecution and the defence. Justice Nazlan thanks both prosecution and defence for professionalism and decorum.

10.15am: Najib re-enters the court room with his lead counsel Shafee Abdullah.

10.10am: The seats in the public gallery are all taken. Najib is in court. No sign of Shafee Abdullah yet.

9.57am: Najib enters the court room, with him are his sons Nor Ashman and Nizar and stepson Riza Aziz. Datuk Seri Mohamad Hassan is also present in court room.

9.46am: Najib’s daughter Nooryana Najwa takes to Instagram to thanks supporters for showing up at High Court. 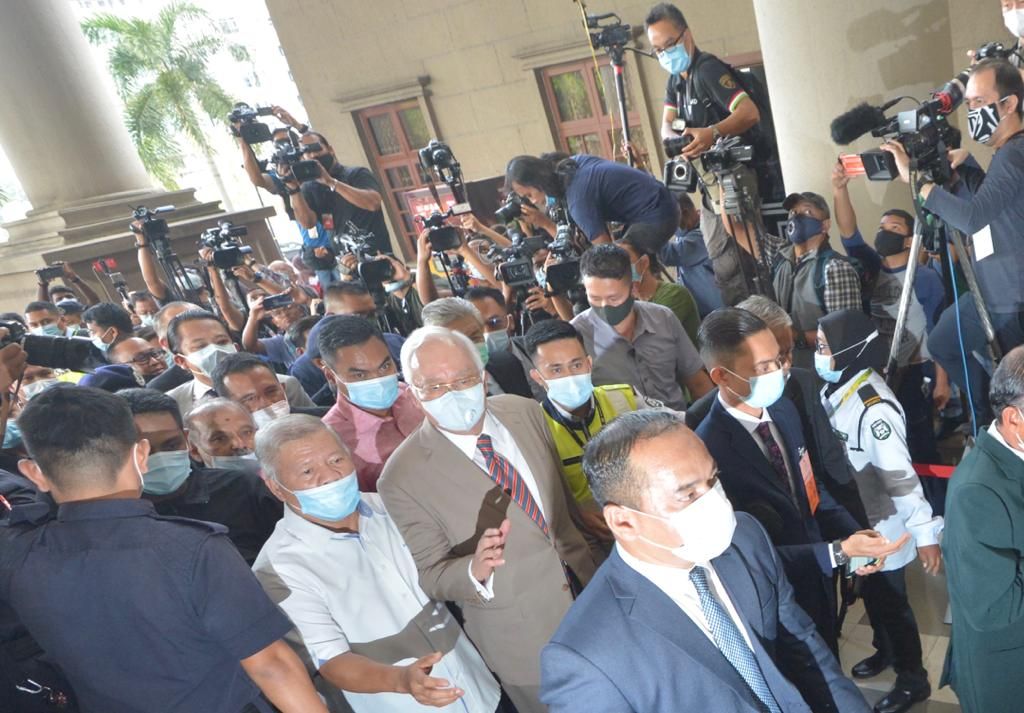 9.31am: Datuk Seri Najib Razak arrives at court complex to shouts of “Hidup Bossku!” and “Kami sayang bossku (We love bossku)” from supporters. Among those accompanying him is Umno deputy president Datuk Seri Mohamad Hassan.

9.30am: The court room is open. Body checks conducted at the door. Police reminding those entering the court room to put their phones on silent and that any form of recording is not allowed.

9.20am: A police officer has just informed the media that the door to High Court 3 will be opened at 9.30am. According to the policeman, the court room is still empty and nobody from either the prosecution or the defence is inside yet. 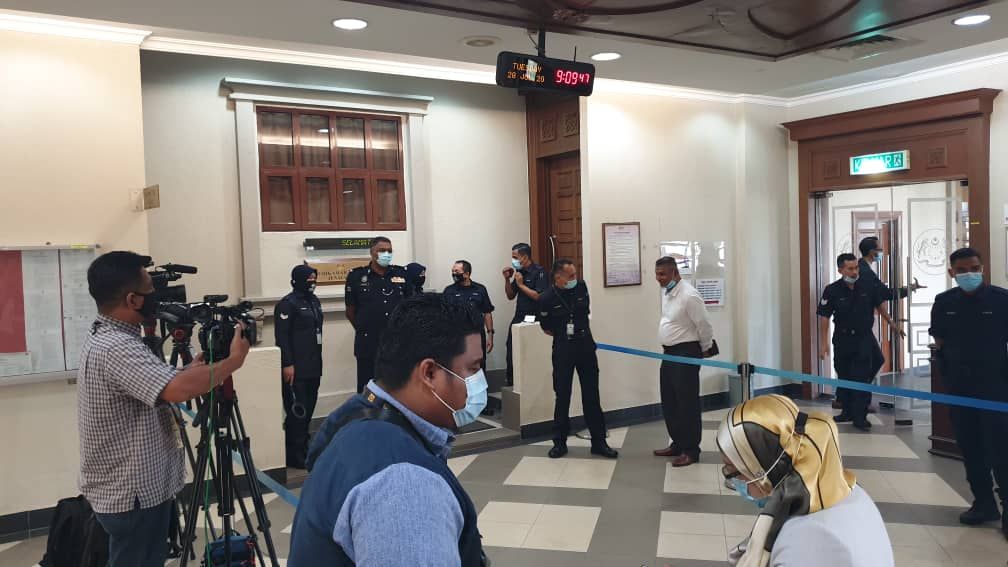 9:10am: Police officers stationed at the entrance to High Court 3 where Justice Mohd Nazlan Mohd Ghazali will be delivering his decision. A police officer said the door will be opened at 9.15am and proceedings are expected to start at 10am.

8:45am: Media personnel with passes are allowed in through the main gate 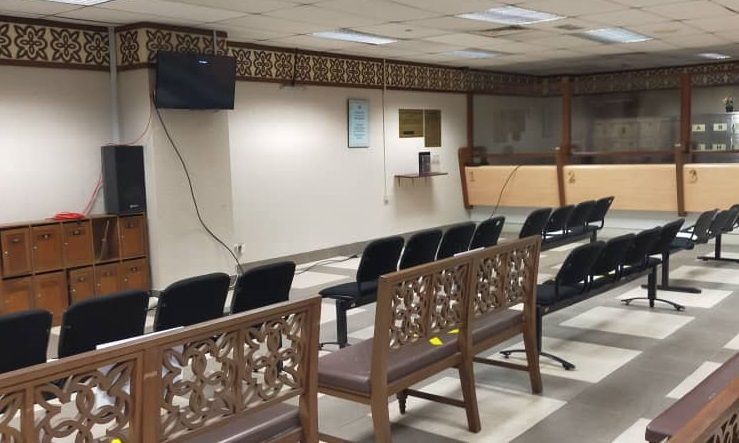 8.37am: Video link room with WiFi prepared by the Kuala Lumpur Court Complex management to cater to 40 local and foreign journalists who are covering the proceedings. Only 10 passes for media organisations, including The Star, have been issued for open court. 8.29am: Long queues forming outside the Court Complex as the crowd starts building up.

8.20am: More than 10 buses are parked at nearby Masjid Wilayah, believed to be carrying Najib Razak’s supporters. Some have arrived much earlier and prayed at the mosque before heading to the Kuala Lumpur Court Complex.

7.38am: A large group of media personnel have gathered at the Jalan Duta Court Complex ahead of today’s proceedings.

Possible second MCO will be announced by PM: Ismail Sabri

Covid19: Bangladesh to close all flights to London